We would like customers to have the information and knowledge it takes to make the best decision when choosing a transportation provider. Please keep this information in mind when shopping for a charter bus company.

Buses are safe. The bureau of transportation reports that buses are twice as safe as flying and 46 times safer than driving an automobile.

Top 10 Questions to Ask Before Chartering a Bus

The first step in any Group Travel happens long before anyone steps on board a motorcoach, but it’s the very first and most important safety factor: the planning. Where do you want to go? How many people will make the trip? How far from home is the destination? Where and when will you stop? How long will you stay at the destination and what time do you expect to arrive or depart?

Many, if not most, student travelers leave “the details” to someone else. They select a starting day and an ending day, a destination and the size of the group and then leave it to others to “fill in the blanks.” And very few travelers fail to add the caveat to “get it as cheap as you can.” In terms of safety, that approach is a recipe for disaster. Let’s address each element in the proper order of importance. We’ll start with the issue of the cost of the trip because that’s often the first criteria considered by student travel organizers.

COST — There’s no question that the price of transportation to and from your destination is important; it often comprises a third or more of the total travel budget, almost without regard to the mode of travel used: coach, air, rail or auto. Comparative cost is often the reason why travel groups turn to the motorcoach. Even after discarding the comfort and convenience advantages of a motorcoach, on a person-by-person basis, the coach represents a bargain. The problem is often those planners who try to stretch too far, to find “a bargain within a bargain.”

Just as it is with so many consumer goods and services, individual motorcoach companies offer a wide range of quality and prices. Most often, the price difference between companies will reflect the company’s use of new or older coaches, the availability of “extras” like videotape or DVD players, the cost of labor in your region of the country or the level of care and amenities offered by the company. But unlike most consumer goods or services, the price difference may also reflect a company’s level of preparedness or its dedication to safe operations.

There are no “absolute” rules of motorcoach buying. There are no strong indicators that tell us that new coaches are safer than old ones; nothing to dictate that clean coaches with uniformed drivers are safer than dirty ones with drivers in tee-shirts. There is no rule — written or unwritten — that requires a safe coach to be an expensive coach or, conversely, that requires a cheap coach to be unsafe. But there are some common sense elements involved that link cost and safety. The first and most important is the fact that safety is expensive.

SAFETY–conscious operators invest heavily in maintaining a safe fleet. Whether they own their own garage or they contract repair and maintenance to reputable mechanics, safe operators achieve that status by investing virtually whatever it takes to ensure that every possible mechanical problem with their coach — new or old — is discovered and remedied before it takes to the road again. That doesn’t mean that it can pass inspection once a year or once a month; most see to it that a competent mechanic inspects and repairs every coach before every trip. And it doesn’t stop there. Every driver is charged with the responsibility to conduct a walk-around inspection of the vehicle before and after every day’s travel, just as a pilot conducts a rigorous pre-flight exam of his aircraft.

Is it possible for a motorcoach company to be safe if they don’t invest as much in preventative maintenance and professional repair? Of course it is, at least for a while. The professional motorcoaches on the roads today are extremely durable and forgiving vehicles. It’s not at all unusual to find well-cared-for coaches with 20- and 30-year life spans still serving safely and comfortably. But the odds of breakdown increase dramatically when an operator scrimps on repairs or invests in the coach’s appearance rather than its mechanical soundness. Statistically, very few mechanical problems on motorcoaches ever lead to crashes, but they do cause breakdowns, delays, missed schedules and hot tempers. The fact remains, though, that some repairs can’t simply be put off.

Price alone is not a reliable indicator of safety. But a price quote that’s significantly lower than the remaining field of competitors can and should be a strong indicator of the need for follow-up. If the same itinerary and trip information has been distributed to many competitors (to ensure that every company is presenting a price based on identical service and conditions), a price that’s substantially lower than the remaining responses may indicate that the bidding company didn’t fully understand your needs. It may also, however, indicate that some aspect of the low bidder’s service is significantly different than the others. That aspect could be safety.

Do not buy on price alone.

ITINERARY AND DRIVER LIMITS— Both the cost and the safety of your motorcoach travel can be affected by the schedule you intend to keep. That’s why it’s so important that you work closely with the motorcoach company to create a workable itinerary of highway travel, meal and rest stops and destination shuttle expectations.

Professional motorcoach drivers are limited by federal and state laws in the maximum number of hours that they can drive in any given work day and work week, and in the amount of time which must be allowed between work shift for rest. Refer to Part I of this Guide for an explanation of the federal “hours-of-service” regulations. Because of the limitations on total and driving hours, your travel schedule must stay within allowable and achievable limits, even if you already plan to use more than one driver. While it’s okay to draft a list of places you want to visit and determine starting and ending dates, spend time with your selected motorcoach operator to firm up a “do-able” schedule.

The hours-of-service regulations are important to travel groups, not simply because they are your primary line of defense against accidents caused by driver fatigue or drowsiness, but because they should also figure closely into the schedule of driving, rest stops, overnights or driver changes that must be made for your trip. As a rule of thumb, a motorcoach driver can be expected to drive as much as 500-miles in the course of one workday if he’s traveling on comparatively uncongested interstate highways. Local roads and traffic snarls will reduce that distance, of course, as average speed falls.

In most cases, a 15-hour total workday provides a good foundation for a very natural and comfortable travel day. The driver may spend an hour preparing for departure, four or more hours behind the wheel, an hour each for two meal breaks with the passengers and a final one to two hours at the day’s destination dropping off passengers, parking and securing the vehicle and reaching his own accommodations.

At the end of the driver’s 10-hours behind the wheel, regardless of where it falls in the 15-hour cycle, something has to happen.

The first and best choice is always an overnight rest stop to allow both the driver and the passengers to refresh themselves for the next leg of your trip. Overnight stops should be scheduled as no less than nine to 10-hours on the passenger itinerary; remember the eight-hour break must not include the driver’s pre- and post-trip duties.
The second option is to have a second driver step in to continue travel when the first driver reaches 10-hours behind the wheel. The safest and most common way to exchange drivers, and the most cost-efficient way, is to have the second driver sent ahead to the staging point the previous day so that he or she will have at least eight full hours of rest at the staging point before stepping on-board.

If the final destination is less than 15-hours’ driving time from the starting point, a third option is available. Some travel groups carry a second driver on the coach right from the start. If that’s your choice, remember that both drivers are “on the clock,” right from the start, so the coach’s total travel time can’t exceed 15-hours. (Both are “on-duty” simultaneously. While one records “on-duty, driving,” the second will be recording “on-duty, not driving” time.)

You and everyone on the coach need to understand that the hours-of-service rules for commercial drivers are virtually chiseled in stone. Violations of these rules can cost a driver and the motorcoach company fines ranging up to $10,000 and they will jeopardize the driver and company’s right to continue to stay in business. You also need to know that if a travel group, agent, escort, chaperon or anyone else uses pressure, coercion, threats, bribes or any other means to force the driver to operate the vehicle beyond his legal 10-hour driving limit, that other person can be prosecuted, as well. More importantly, by allowing or coercing a driver to exceed federal and state limits on hours-of-service, the safety of the travel group can be seriously jeopardized. The rules were created to protect passengers, drivers and those who share the road with commercial vehicles.

The time of day when your group travels can also be an important safety issue. Anyone who drives understands that fatigue is a natural occurrence, but it’s a moving target. If your driving day consists of effort-free travel on uncongested highways, a longer driving day may be in order. If your hours behind the wheel are spend in slow, irritating, traffic, the hours feel longer. The time of day makes a difference in the comparative ease of driving. Still, many student travel groups plan late- day departures and all night travel using a driver change to allow the coach itself to be used as a “rolling motel.”

Through-the-night travel isn’t prohibited by any regulation, but safety risks increase with the practice. Even if the motorcoach driver is fresh, well-rested and alert, overnight driving exposes the vehicle to a much higher percentage of tired auto drivers who aren’t governed by any regulation other than their own judgement. Driving at night is far more demanding and tedious than driving in daylight, even on the same roads, even for professional drivers and especially for the non-professionals who may be traveling the same highways.

It’s also a fact of life that — despite the comfort of today’s luxury motorcoaches — they simply are not the equivalent of a hotel or motel bed. Sleeping on board a moving vehicle isn’t as restful for most travelers, and arriving at the destination early in the day is hardly a benefit if the travel group is too tired or too cranky to enjoy it. Often, the savings on hotel rooms at a midpoint stopover are wiped out by the added expense of salaries, advance placement travel and stay-over costs for the second driver, coupled with the leap-frog travel and stay- over costs of the first driver.

When you plan your travel itinerary, seriously consider starting earlier, travel primarily through daylight hours, include an overnight rest stop and, if needed, arrive at your destination fresh but a little later. Safety is your first concern. Using a healthy dose of common sense and realism in planning your trip can virtually assure a safe trip. 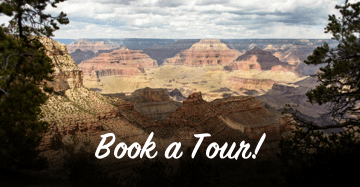 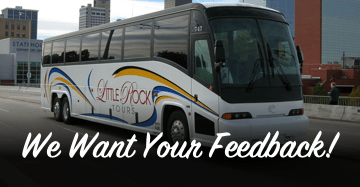 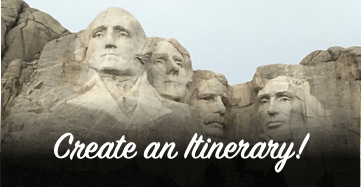 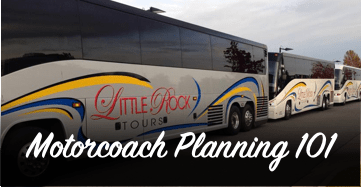 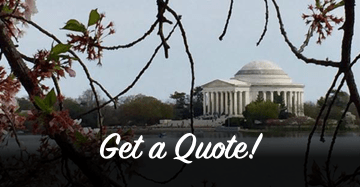 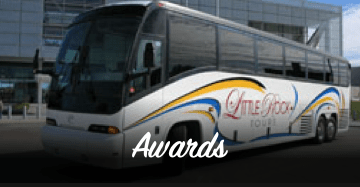